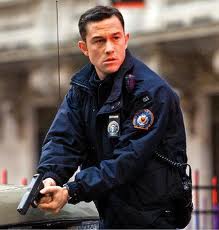 Lot of speculation about John Blake. Since, I have already posted the story, I might as well just state, beyond reasonable doubt that John Blake will be the next Robin/ Nightwing. Its simple. I am not going into conumdrums about the trailer. Finally a toy-line has completely taken the cat out of the bag. John Blake does don a kinda of a superhero costume- Probably he takes over from Batman, when his back is broken or this the one, which he gets at the end. Look at the character at the extreme right - That'S BLAKE in some kind of Night-wing costume. I don't think he will be Azrael. This just clearly indicates, he has some kind of extra role to play in this movie. He's just not an average-Joe- Cop. I will just tell you why its such a possibility:- 1) Batman either dies or retires at the end, because Nolan wants to end it(SO STUPID) WE haven't even seen some of the best villains yet. Grrrrrr! Wud have loved to see his take on Hugo Strange. So what
23 comments
Read more
More posts