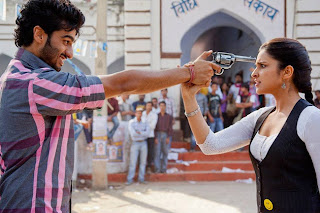 Loved Ishqzaade. The first half is smashing and even though, the second half seemed a little contrived.. still simply loved Arjun Kapoor and Parineeti Chopra. The feelings and the emotions somehow got lost with the pace in the second half. Too much Tarantino and Sergio Leone dip-dashed everything, but still two lovers indulging in a shootout ala Butch Cassidy and Sundance Kid with an awesome soundtrack by Amit Trivedi -and you just look away and simply forgive the mistakes, when u r bludgeoned with such brilliance. Parineeti Copra- you are a revelation - Piggy chops doesn't even come close to you. The difference between these two sisters is that Priyanka Chopra is an excellent actress, whereas Parineeti just doesn't need to act - she is spontaneity personified! I shudder to think that she is just two films old and if this is her repertoire of talent - she will leave everybody far behind.AWESOME ATTEMPT TO BREATHE NEW LIFE INTO A DEAD GENRE OF LOVE STORY ....Just falls a lil
20 comments
Read more
More posts