KRATOS IS THE KING 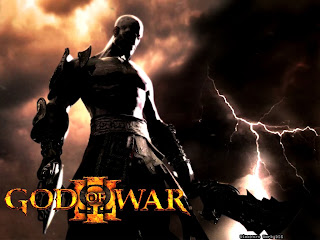 Yes, it lives up to expectations, but we wanted more from Kratos. Its an old game.But many people buy a PS3, just to finish the saga of Kratos. Does it deliver a knock-out punch. It does, but I still believe God of War 2 was the best GOW game i have played till now. The level design, the story, the boss-fights, the weapons and the cliffhanger end,which just propelled the PS3 purchase as a must buy console for any market.
Let me analyze the game for everybody, so that you all know exactly what one can expect, when you buy this title.
Well what are the pros for God of War 3:-
1) Awesome God-whipping.(Where else can you knock the living daylights out of Hercules, Zeus, Poseidon, Hades, Apollo and live to tell the tale)
2) The level design is sturdy, if not extraordinary. Special mention for the levels in Hell.
3) The story of Kratos does end - addressing everything, so there is a closure of sorts. So its a sound finale.
4) The final levels are pretty good, where Kratos develops a conscience and transforms into a protector from a killing machine. This definitely helps the game notch a few points more.
Finally its Kratos- he completely changed the gaming scenario a few years back and people suddenly realized that gratuitous violence looks so good and feels so incredibly thrilling. Its good to be bad and selfish and evil but just keep it for gaming. It is one of the best escape vents one can use in order to understand power abuses and too much power completely exterminates everything. So when Kratos leaving us for good with repentance in his heart at the end of his life, you do feel a little bad for the big bad guy.
The Cons:-
1) The best Boss fights are at the beginning. After defeating Hades and Poseidon, its basically a sleepwalk through the other bosses. The difficulty level needed to increase with every passing boss fight. In fact the Zeus Fight at the end was just done by me in 10 minutes flat. The final boss fights should have been more challenging.
2) The level design is ornate and richly detailed, but I felt there was something wrong. It was beautiful to look at - But there was no sense of mystery and awe, as Kratos proceeded from one level to another. It was more like- Here I go about my job - Killing Gods and I glance and stare at the wonderful paintings hanging here and there. Its just that - I loved GOW 2 so much and the level design was so well balanced in that game, that I felt GOW 3 was more like - Oh! we have so many wonderful ideas - lets all stitch them up together and make an exhilarating tapestry. The smooth transition or progression was absent. After a while the game becomes a chore rather than an experience. It was more like Kratos just crying out aloud : Enough of Jumping and killing and maiming and disemboweling - When do I get to my dad?
3) The emotional pull for Kratos is nearly absent, but still we feel for him, when he accidentally kills his wife and son in God Of War. We thought in this game, that aspect will be addressed. We will care for him a little more but the game designers reserves 3/4th of the game just enhancing his role as a bloody blunt butcher and nothing else and then at the very end, they try and insert a few chapters to show his kinder side, but it happens too late. We really don't feel any sympathy for him. This is the difference,when you see Snake fighting his way through in MGS4- you are literally crying for that guy and shouting while playing, but with Kratos, its like - Well fought - you gave us a lot of fun and mirth and blood - Adieus! So long - give me your cool weapons and muscles before you die.
4)What else? In short God of War 2 was better than God of War 3 - thats the difference and if you make a trilogy with the sequel being better than the third game, a serious gamer will notice and point out the misses. I am not saying, that I didn't enjoy playing GOW 3, I am just remarking that I expected more than what was expected. Did it deliver all the good? Yes all the goods were delivered, but we didn't get any goodies. Did it deliver a knockout punch? Yes it did, but we can't be satisfied with one or two or three.We want at least 12 punches through a 12 round fight, when it comes to Kratos- we didn't get that.
So should you buy a PS3 for GOW 3. Oh! you most definitely should. God of War is the classic example of a game, which set its bar so high, that when a later game just fails to achieve it by a few inches it gets noticed. When you are staring down from Olympus, after vanquishing Zeus- the height matters.