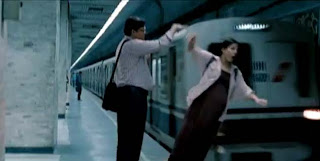 Its very wrong to bring down such a brilliant movie, but I would just like to point out, where the similarities lie. There are three sources from where Sujoy Ghosh took inspiration to make Kahaani. This post is not to undermine his work or demean him or say he simply copied something. I sincerely believe Originality is the art of concealing your source and Sujoy did it damn well and we should credit him for making such an awesome movie.
Anyways here goes:-
1) The body of the movie is essentially taken from "The Vanishing" and "Don't Look Now" . The theme is trying to find out someone close, who has disappeared.
2) The Twist is based on a method called The Unrealiable Narrator method. This was first used by Agatha Christie in the Murder of Roger Ackroyd and very well used in "The Usual Suspects" and even surreally in " The Fight Club". In this movie the unreliable narrator is Vidya Bagchi, beacuse we tend to believe her, as she tells her story i.e. KAHAANI.
3)Finally the flesh of the end is TAKING LIVES - We don't want Sujoy to own up, but its quite striking,because the build up is quite similar to the one used in Kahaani. The climax builds up to a point, where the woman is portrayed as a weak vulnerable creature and then she strikes. Angelina Jolie performs the same act as a knife is plunged into her womb by Ethan Hawke and here, Vidya Bagchi is kicked and virtually at the mercy of the killer at gunpoint, when she strikes. Both are feigning to be pregnant. That's quite obvious.
But does this mean Sujoy has copied anything. Absolutely not. He may have derived some influences, but he hasn't completely lifted anything from anywhere. In that context I would blame Spielberg for completely snatching E.T. from Ray. We can even say Bob Biswas is so very like the assassin in Windmills of God by Sidney Sheldon, but that is an influence not plagiarism. I feel sick, when I hear people saying Sujoy Ghosh has completely copied an English Movie to make Kahaani. Its very wrong and its belittling the man's effort. Its a smashing movie, worthy of every laurel its receiving. And I loved KAHAANI much more than TAKING LIVES! So be a Good Bong and cheer for another one. Jiyo Sujoy! Keep it coming bro.
Kahaani copy kahaani english copy kahaani inspired by english movie kahaani plagiarism kahaani spoiler