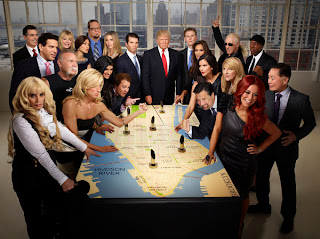 I love the Apprentice. I am just a crazy fan of this show. So what happened this week. I would say this was the AWE - BRAY show. Even though she cried herself dry yet...well some people just might watch the reruns. Won't spoil the fun for them.
I will simply post some points from each episode. Not rave,rant or indulge in a rhetoric about it, so here goes.These were the highlights and the lessons of this week's episode:-
1) Never compromise on the branding. Even if you hit all the sweet spots in a task or even a business venture, remember Brand visibility is of paramount importance and nothing can be more important than that.
2) Never nurse ill feelings. It can just kill team spirit, in spite of having an awesome team leader.
3) Boys can sort out their differences to move ahead but women need lifetimes.Clay is slowly turning out to be a very strong competitor and loved the way Penn and he resolved issues to move the task forward, yet Patricia just remained aloof and didn't listen to Aubrey, because of their past issues.
4) Aubrey did hit upon another Trump family member and Donald put in a floater that she just might have a boyfriend after the show ends. Don Jr beware!!
5) Donald Trump personally donated 10,000 dollars to someone and no prizes for guessing...it was his favorite....Oh! Gentlemen prefer Titians nowadays. :D
6) Ivanka Trump is the most composed, beautiful, intelligent Trump ever. Watch the way she brings her brother and father back to comprehend what was the real reason behind the failure of a task. She is so smooth and delightful.
7) Miss Universe keeps on getting targeted and that's just plain evil of all the other girls, because she is really not that bad and should be given a chance to prove herself.
8) Lisa maybe a great comedienne but she is getting irritating day by day and Debbie Gibson's voice has gone for good, but her songwriting skills and musical sense is intact.
9) The Boy's team is such boring viewing. We had some sauce with the Penn- Clay rivalry but things settled down and they are functioning wonderfully as a team. Good for them - Bad for Television. Women are much better - Bitchy Itchy Horrible Tantrums, Fights - Love them.
10)Prediction - The way things are going - We just might be calling Awe- Bray - Aubrey Trump by the end of the show. Jokes apart she is feisty and very talented. And simply adore her.
So thats it! This is my 1st Apprentice post - Hope you like it. Enjoy the show and Love the money.
celebrity apprentice 2012 celebrity apprentice episode 6 Celebrity apprentice recap latest news celebrity apprentice season 12 episode 6 celebrity apprentice week 6 Crystal Blight apprentice