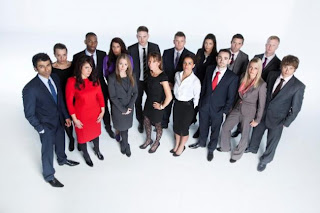 I admire Lord Sugar. I think he is frank, cut-throat, mean and walks, talks, eats business. And the Apprentice UK is a wonderful show. I love it more than the US version any day. Its hard-core commerce at its best.
I won't be discussing the show and the contestants and their weaknesses and strength or even what happened? You have too many blogs doing that. I will be simply putting across some lessons I learn, while I watch this awesome show.
So the first episode, the lessons were very simple and Sugar gave it in a BITTERSWEET way:-
1) Don't talk, don't explain, don't badger, don't procrastinate too much. Sometimes how good you are - just gets clouded by being too overbearing. Just be crisp, clear and short with whatever you have done.
2) Sometimes just being quiet can save you. Throw the right things fast at appropriate moments and then just keep shut if your skin is on the line. It just might get you through.
3) The task is God. No one cares about your resume. But the work you did on the task.
4) Maths rules over creativity. Sometimes the work behind a good product can be undone simply by poor logistics and ill-treated execution. And even vice versa. Sometimes a bad product can be sold at a huge profit with careful planning and execution.
5) Women - They simply tend to re-iterate whats so wrong with their species. If they could just sit and work with each other, they can do anything, but its impossible to make a group of women agree amongst themselves over anything. Everyone believes something could be done better than the preceding opinion and that leads to nothing being done at the end.
6) Don't try too hard to survive. If your head is on the chopping block, sometimes the butcher can have a change of heart, before bringing the cleaver down. Give the butcher a chance and don't flap too much.
MY TAKE ON LORD'S SUGAR'S FIRING - I think it was wrong, but the person asked for it. Essentially Lord Sugar's patience was tested. He was about to fire someone else, but too much talk made him change the decision from the tip of his tongue. And it was so close...
MORALS OF THE EPISODE -
1)Creativity needs to be backed by sound logic in order to be profitable.
2)Bad products can be sold with wise arithmetic.
apprentice Uk Episode 1 Apprentice UK Season 8 Episode 1