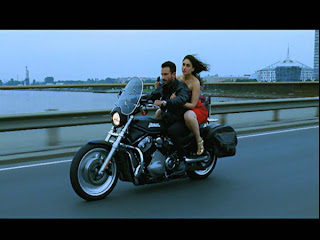 Everyone hates Agent Vinod. I talk to anyone.They seem to tear,rubbish, abuse and put this movie into a shredder. Hence I am not going to go into the details of how bad this movie is. Everyone has an opinion about that. So I will walk a different path and tell you, why it should be watched once, at least. It's not that bad and definitely not as horrible as it sounds or seems.

Lets start at the very beginning :-

1) The Hero - Saif Ali Khan Pataudi. Everyone is saying, he didn't act well. Listen he didn't need to. This was a fun movie, not a Tinker Tailor Soldier Spy. You needed a man, who looked convincing, while shooting, punching, kicking,jumping and delivering deadpan lines with a straight face and Saif does that with aplomb. Yes, there are some raw edges. Even Sean Connery needed time to settle into Bond. He delivered his best wisecracks with a an uneven face in GOLDFINGER, that was two movies after Dr No. In my book, Saif was deadly and cool as Agent Vinod. He just needs to work on the character a little bit and that will only come through with a better script. However the physical aspect of the character was nailed fair and square by him. He is the only hero in Bollywood, who pulls out a magazine from a silencer pistol with poise and elaan and the stunts he did were pretty good.

2) The Songs - I loved all the songs in Agent Vinod. Maybe two were copied, but I don't care. Pungi from some Arabian tune and another from Rasputin, but when I go to watch a movie, I don't delve into ancient history and too much judgement. I just want to watch the movie and enjoy and I enjoyed all the songs of Agent Vinod. And Raabta is just ethereal.

3) The picturization of Raabta is wonderful. Its done in one take and one of the high points of the movie. Needless to say Shreya's voice, while bullets are flying on the screen is just pure heaven!

4) The look and the production design of the movie is the coolest ever! A femme fatale in snow laden Russia being trigger happy with an Uzi are just one of those sights, which remained with me, even after the movie ended.

5) The Special Effects,though not many were Godly. Ravi Kishen's jump from the train, while fleeing from Russian Arms dealers was so very Source Code-like. Brought back memories of Jake Gyllenhal's jump from the train. I just could not believe my eyes, when I saw that scene. Full marks for that snazzy effect. Then the main antagonist i.e. the Colonel getting snapped up by the Rotor blades of the helicopter. It was brilliant CGI!

7) The last wish of Saif to Shahbaaz Khan, Funny take on serving the beer..Watch it. It definitely sparked a giggle from the audience and of course the fight with the LTTE guy in the auction - wonderful snap editing with another fight, which took place in Sri Lanka. Love these Sriram Ragahvan moments. He is so adventurous and pushed the envelope with that fight choreography.

8) And the last chase to get the Bomb. It was very 24, it was very Jack Bauer and Saif was just plain freaking awesome, as he ran, rode a bike, fell, jumped over a bridge and ....saved the day.Even the baddie snatching an auto and navigating through the streets of Delhi with an 88 for company was a hoot. Loved it absolutely. The only complaint was that it built up to a high, only to deliver a very feeble conclusion. The Indian Public would have wanted some Pow - Wow between Saif and the baddie. Just a plain shot on the forehead- Come on -We wanted more. :)

9) Good welcome change to explore the grey sides of the fringes. We don't have a villain in Al Queda ,rather people playing India and Pakistan against each other to get their means served. The conversation and the bonhomie of two senior chiefs of RAW and ISI was a really nice touch.

10) The background score is a whiplash. It bleats 70s retro fun scores, as the excitement unfolds with punctuating bass and treble. It was a double edged sword though, because I loved it, but in this M.I. generation - they would rather go for something cooked by Moby or Pitbull.


Finally I think its an excellent start to a franchise. We have an average movie here, so things can only get better from here. If we had an extraordinary movie in Agent Vinod, we would have had an issue, because then the sequel would have to live up to expectations.

The reason why it doesn't work is because of four reasons:-

1) Its difficult to marry Bond, Bourne and Smiley and then put 5 songs in it and then make it work. No one has been able to do it. This was the problem with the movie. The scriptwriter, director and the actor and producer had different ideas of their own and wanted to integrate all of them, which simply spoilt the broth.

2) The chemistry of Kareena and Said is Touchwood! baaaad - They just don't have any chemistry. Its harder than the wood of any oak or timber you could ever get. Their relationship was the pivot of this movie and unfortunately both of them couldn't make it work on screen. It was pain to watch them exchange glances and try to explore something, which just wasn't there.

3) Many people are saying that all the action sequences and the plot points proceed as if they are video game montages. The first scene just feels so like FAR CRY, then the disco scene is so very like HITMAN and then..... I leave it to the viewer's imagination. My take on the situation is that - Don't you dare compare any movie with games. Play the Mass Effect series and then watch movies - you will realize movies are not even dust or ashes or even amoeba to Games. GAMES ARE IN ANOTHER GALAXY AND SUPERIOR IN EVERY FORM AND WAY.
4) After two iconic movies like Johny Gaddar and Ek Hasina Thi, we expected a lot more from the director. Agent Vinod doesn't even come close to the greatness of Sriram's past two efforts. So I did feel a little let down.

And that's all there is to it and hence its getting lambasted so trenchantly. Otherwise Agent Vinod is really not that bad. Yes I agree, AGENT VINOD is a flawed effort, but the effort spent is worthwhile, as it can only get better from here.Give it a shot. You just might like it.

Bye - Raabta for now... Pritam I think you even snapped this song. Its too beautiful for words. :)
agent vinod good review agent vinod review good things about agent vinod why you should watch agent vinod

Sayantan Ghosh said…
"Don't you dare compare any movie with games. Play the Mass Effect series and then watch movies - you will realize movies are not even dust or ashes or even amoeba to Games. GAMES ARE IN ANOTHER GALAXY AND SUPERIOR IN EVERY FORM AND WAY." - Seconded!
And to come back to AV, its a definite 1 time watch.
6:26 pm