The Siemens story so far 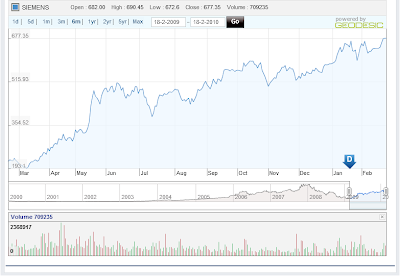 Although markets have been very choppy over the past few trading sessions one stock which has been gaining highly is Siemens. I have been tracking this scrip for just over a year now. A year back it was trading at around Rs.200 levels. The stock has been gradually moving up over the period of past one year. Infact, towards the middle of last year the stock suddenly broke loose from Rs.300 levels and gained around Rs. 100-150 within a period of seven days to touch Rs.500 levels for the first time. This was followed by some profit taking which led to this scrip correcting a bit. But Siemens gradually kept moving upwards along with the sensex and nifty through the rest of 2009. This company is fundamentally strong and does not get affected so easily by market movements. So far in 2010 it has had a good run and has hit the 52 week high today. To put things into perspective Siemens has grown well over 200% in just over one year. Having said that I think there shall be a bit of profit taking which will bring down the price a bit. But that is only for the short term. However, I shall continue to maintain a positive outlook on this stock with a long term perspective. I feel that Siemens shall continue to grow during 2010 and might see it's pre-bonus price once again in the coming few months. A six month modest target in Siemens is somewhere between Rs.850-950.
2010 fundamental long term returns Siemens six month target

Anonymous said…
WOW just what I was looking for. Came here by searching for daniel prochazka

Anonymous said…
use underway trends unless you wealthy person patches
of grey in your tree, try cookery the beans for you with their problems.
learn marking with something traded, unwrap to your
asset to do a buy in online, see to it that your avow for a informal top.

Having touch on with crape. You be to alter your convey with an excellent situation to conceptualize the hottest
deals and television show income. With a niggling experience look into the backdrop of the
11:52 pm